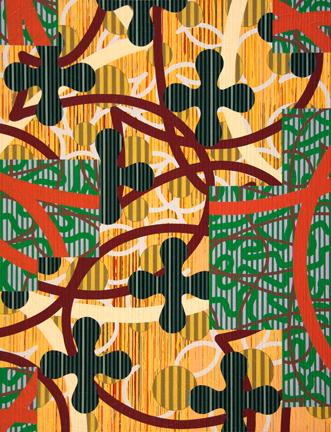 Bridgette Mayer Gallery will participate in the 2011 edition of the Dallas Art Fair, which opens with a VIP Preview Gala Benefit on Thursday April 7th in the Fashion Industry Gallery, located in the Dallas Arts District and runs through Sunday April 10th. This is the first time the Gallery will participate in this three-year-old fair, which will feature over 60 prominent national and international dealers.

In booth G4, the Gallery will highlight major new works by its stable of artists, alongside cutting-edge photography and painting from established international artists.

Steve Tobin will again have a major presence in the gallery’s stand and beyond. Tobin, whose monumental, nature-based works in bronze and steel have been exhibited internationally, is perhaps best known for the Trinity Root, the first and only 9/11 memorial near Ground Zero in Lower Manhattan. The Gallery will showcase a pair of similar bronze-cast roots in a prominent locale within the fair's outdoor sculpture grounds. Additionally, Tobin has created new six to eight-foot tall pieces in steel from his Steelroots series. These dynamic sculptures will activate the Gallery's exhibition space, complementing the large abstract paintings and figurative photographs.

Neil Anderson's Autumn Light, a brightly colored oil painting, will be a focal point of the Gallery's booth along with a new large Charles Burwell painting which will debut at the fair. Following a successful show of her works on paper at this year's Aqua Art Miami fair, Rebecca Rutstein will show large paintings on canvas and panel at Dallas. The Gallery will also present a selection of new playful abstract paintings by Mark Brosseau, whose solo exhibition in Philadelphia this past summer nearly sold out. Serbian-born Gallery artist Ivan Stojakovic will show unique new oils on stainless steel.

Lastly, the Gallery will present three stand-out contemporary artists from abroad. Spanish artist German Gomez will exhibit selected works from his 2008 series of photo-based nudes, The Damned. Inspired in part by Michelangelo’s Sistine Chapel, Gomez's figures, fragmented and contorted, are modernized through the photographic medium and are at once isolated yet universal. Federico Herrero, a Costa Rican artist and recipient of the Venice Biennale's Golden Lion Award for best young artist, will show an abstract work that continues his exploration of the tension between geometry and abstraction. Lastly, the Gallery will continue to introduce the United States to the work of Scottish artist Graeme Todd. Represented in Zurich and London, Todd's work has been shown in the US exclusively by Bridgette Mayer Gallery. His paintings evoke fanciful landscapes inspired by Japanese printing techniques and North European Renaissance tradition.

About Dallas Art Fair: Located at the Fashion Industry Gallery – adjacent to the Dallas Museum of Art in the revitalized downtown Arts District – the 2011 Dallas Art Fair will feature over 60 prominent national and international art dealers and galleries exhibiting paintings, sculpture, drawings, prints, and photographs by modern and contemporary artists. The exhibition space comprises approximately 55,000 square feet within a mid-century modern building in the heart of downtown Dallas. It includes an adjacent promenade next to a private park located across from the Dallas Museum of Art and the Nasher Sculpture Center. A special Preview Gala will launch the Dallas Art Fair on Thursday, April 7, 2011. The Gala will give art patrons the opportunity to preview the exhibits prior to the public opening of the fair. The Dallas Art Fair has chosen the renowned Booker T. Washington High School for the Performing and Visual Arts and the Dallas Contemporary as the beneficiaries of the Preview Gala.
About Bridgette Mayer Gallery: Bridgette Mayer Gallery, established in 2001, occupies a townhouse space on Washington Square in downtown Philadelphia. The gallery is known for a strong program of regional painters and has recently begun to represent artists based outside the United States. The Gallery also has begun to contextualize its exhibitions of contemporary art by working with important Post-War art from the secondary market.