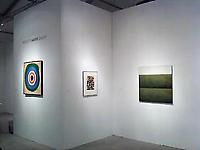 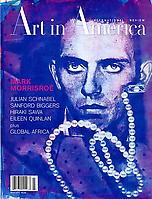 In this show of nine recent paintings, "Structuring Desire/Desiring Structure," Charles Burwell offered no quiet moments. The title suggests a mind comfortable with systems of order, such as those found in math and science. But Burwell's visual world, which comprises overlapping shapes and striated hues, is brilliant and delightful. While we think of scientific investigations as somber and labored, Burwell's abstract structures, replete with optical effects, dazzle the eye, prompting viewers to check and recheck what they see. 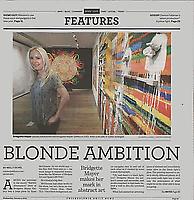 Gallery owner and director, Bridgette Mayer, was recently featured in a multi-page spread in the Philadelphia Daily News. Read on to learn about her early life, gallery practice and plans for the future of the art world in Philadelphia.

The Painting Center is pleased to present Shifting Speeds, an exhibition of recent paintings by Arden Bendler Browning, Rebecca Rutstein, and Charles Burwell, highly regarded artists who prompt us to reflect upon the elasticity of time, space, and perception. In varying ways, these artists explore multi-layered approaches to painting, from the use of screen-printing, templates, and overlapping transparencies, to combinations of broad strokes, evolving patterns, or precise detail. 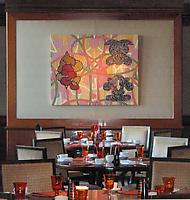 Charles Burwell's iconic paintings are on view at the Fountain Restaurant at the Four Seasons Hotel in Philadelphia. [Will be on display from Feb. - July 2012] 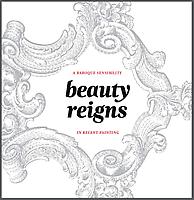 Bridgette Mayer Gallery is pleased to announce that two gallery artists, Ryan McGinness and Charles Burwell, will be exhibiting in the upcoming traveling exhibition, "Beauty Reigns: A Baroque Sensibility in Recent Painting." The show's first venue is the McNay Museum in San Antonio, Texas.

Gallery Artist Charles Burwell is exhibiting in two coinciding shows: Layering Constructs at the Delaware Art Museum on view from April 11 - August 2, 2015 and Layering Constructs at the Delaware Center for the Contemporary Arts on view from April 18 - September 7, 2015. The painting pictured is the longest Burwell has every created, measuring 21 feet long. 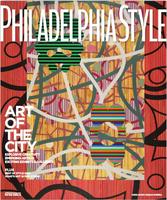 Gallery artist Charles Burwell is featured on the cover of the latest issue of Philadelphia Style Magazine. In his very own four page spread, Burwell explains how Philadelphia is one the greatest inspirations for his work. He states: "there's certainly a connection to my living and working in Philadelphia with all of its visual complexity". 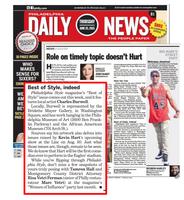 Art of the City Soirée with Artist Charles Burwell

In conjunction with Procession: The Art of Norman Lewis, this program will highlight – and perhaps complicate – the reality of being a black artist in Philadelphia in the 1960s and 1970s. What were the challenges? What were the unique opportunities? How is the Philadelphia art world of today different – or not – from those realities?

Panelists will use their own lives and careers to address these issues and make connections to the larger urban art world context in which Norman Lewis worked. Panelists include Moe Brooker, Martha Jackson Jarvis and Charles Burwell, in conversation with A.M. Weaver.

Gallery artist Charles Burwell was included in the exhibition "Faculty Selects" at the Grossman Gallery at Lafayette College in Easton, PA. The exhibition runs from Nov. 6 - Dec. 19 with an opening reception on Nov. 5 at 4:30.

Bridgette Mayer Gallery Re-Opens to the Public in its Historic Washington Square Location at 709 Walnut Street with a Bold and Exciting Group Exhibition, Karmic Joy,Starting June 1, 2021.