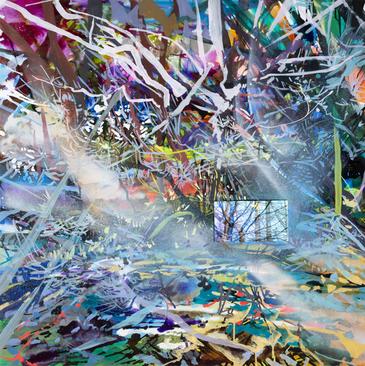 Philadelphia, PA –August 23, 2022. The Bridgette Mayer Gallery is excited to announce a solo exhibition of works by Arden Bendler Browning tilted Wayfinding. The exhibition follows Bendler Browning’s recent completion of a major public art project, Elastic Geography, which is a 25-by-140-foot mural on the side of Yards Brewery, commissioned by Mural Arts Philadelphia. Wayfinding will be on view at the Bridgette Mayer Gallery from Tuesday, September 6 to Saturday, October 22, 2022, with an artist reception on Friday, September 9 from 5:00 to 7:30pm.

Wayfinding will be Bendler Browning’s second solo exhibition at the gallery, and will feature an all-new body of work created in part during her time at Interlude Artist Residency in the Hudson Valley, NY. The title of the exhibition comes from the book Wayfinding by M.R. O’Connor, from which Bendler Browning found inspiration while working on these pieces.

Wayfinding features 21 new paintings, a Vault installation of over 50 mixed media works on panel, and a custom interactive virtual reality work. Some paintings also incorporate new media, in the forms of a video slideshow and a small projection. In discussing this body of work, Bendler Browning stated:

When travel became restricted and limited in 2020, my studio practice shifted towards a search for safety and wonder within spaces connected to my daily routes. The spaces that continue to beckon me over and over again are the understories of familiar sidewalk trees that I observe throughout changes in seasons, time of day, weather, and my own moods.

I take photographs, make little paintings, and record video of the way they move and change. I make large paintings while looking at the small paintings, while watching looped videos, and while studying the different perspectives recorded by the compacted all over detail of smartphone photography. I also make virtual reality 3D paintings stemming from photographs of these tree drawings. Then, I make new paintings while watching video documentation of the VR paintings. These new paintings are more abstract, yet still descriptive of a developing and remembered space. Each step in my creative process offers a new perspective and unexplored paths.

When a painting is on its way to becoming resolved but not quite settled, I am so absorbed that I am not thinking about my surroundings or next steps, yet I am actively finding my way out. I want to offer other people a way to be so immersed in a world that they can wander and imagine, but can also feel encouraged to explore and meander without a directive to solve or comprehend.

About the Artist:
Philadelphia based artist Arden Bendler Browning creates large paintings, small works on paper, and virtual reality (VR) environments. Her work explores movement, the desire for travel, the effect of digital imagery on perception and memory, and finding wonder and escape through immersive spaces. Her work hovers between landscape and abstraction.

Bendler Browning’s works are included in several public collections including the West Collection, the Pennsylvania Convention Center, Dream Hotel Nashville, Frost Tower Collection, Toyota, PNC Tower, amongst others, and numerous private and corporate collections. Her work is represented by Bridgette Mayer Gallery in Philadelphia, Galleri Urbane in Dallas, and Tinney Contemporary in Nashville. Her work has been featured in The Washington Post, Hyperallergic, New American Paintings twice (2009 & 2013), Bmore Art, The Studio Visit, Nashville Scene, I Like Your Work podcast (with an accompanying catalog), D Magazine, Philadelphia Style Magazine, The Morning News, Philadelphia Inquirer, Atlanta Journal-Constitution, and Drawing Magazine, among others. She has been featured in exhibitions at the American University Museum at Katzen Arts Center, Pennsylvania Academy of Fine Arts, Penn State University, Weatherspoon Art Museum, James A. Michener Museum, Swarthmore College, Kutztown University, University of the Arts, West Chester University, Delaware Contemporary, Arlington Arts Center, and more. Public works include "Nonstop" (2017), a commissioned Percent for Art project for the City of Philadelphia at the Philadelphia International Airport, and "Elastic Geography" (2021), a Mural Arts Philadelphia project. She recently completed artist residencies at Interlude Artist Residency in Livingston, NY and at the Pouch Cove Foundation in Newfoundland, Canada.

Bendler Browning holds a BFA in Art with honors from Carnegie Mellon University (1997), a Master of Studio Art with high distinctions from Sydney College of the Arts (2000), and an MFA in Painting from Tyler School of Art (2003). She has lived and worked in Philadelphia since 2001, with her husband, creative tech programmer Matt Browning, and their three children.

Gallery information: Bridgette Mayer Gallery is free and open to the public. We are located at 709 Walnut Street, 1st Floor, Philadelphia, PA 19106. Gallery hours are Tuesday – Saturday, 10:00am – 5:00pm.