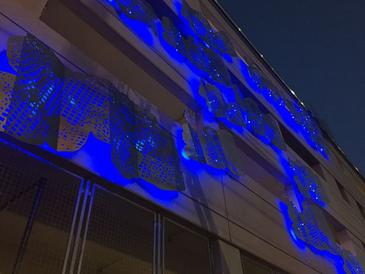 Bridgette Mayer Art Advisors is pleased to announce the completion of a 1% Art Project at Temple University’s LEED Certified parking garage on the corner of 11th and Montgomery Streets.

Philadelphia artist Rebecca Rutstein was selected by a committee of eleven members for this commissioned project which began last spring. The fifteen artists originally considered for the project were eventually narrowed down to five, who then presented their work, before the committee decided on Rutstein’s concept.

Rutstein presented a concept for eighteen floating cloud sculptures constructed of bent steel that started at the base of the garage and float up to the top of the five story building, breaking the architecture at the top of the structure. Each 5 x 10’ cloud was designed to be wired and back-lit to allow for the possibility of various lighting compositions. The committee was most excited about the variety of the lighting concepts, which includes a “starry night” feature in which the clouds twinkle with an illuminated node star effect.
The sculpture project, titled “Sky Terrain,” was created with 16-gauge steel that glistens and gleans in the sunlight, often casting shadows on the crème colored building supporting it. “Sky Terrain” also picks up hues from the surrounding buildings, sometimes appearing pink and lavender during the day. Shortly before sunset, the lighting program begins with bands of color, ranging from blues to warm pinks and oranges, emulating a sunset. As the day turns into dusk and evening, the lighting program imitates “Blue Hour”, a period each morning and evening when the sun is a significant distance below the horizon and the residual, indirect sunlight takes on a predominantly blue hue. There are additional lighting designs that are part of the programming including an artistic array of red and white illuminations that will be featured on Temple Univeristy “Game Days” on campus. The overall concept of the lighting is to utilize intense hues to evoke the light found in the nature.

Rebecca Rutstein not only wanted to make an impact on the immediate lighting needs of the corner at 11th and Montgomery, but also hoped to give the students and others in the community who utilize this highly traveled corridor, an opportunity to pause and reflect. The addition of cloud-like forms floating effortlessly and changing colors during the day and then transform in the evening through animated lighting that mimics the sky and simulates twinkling stars, is an opportunity for the public to enjoy these nature-inspired phenomena in an urban environment.

Rutstein says, “I was very excited to be selected by the RDA committee and Temple’s committee for this project. I have been doing privately commissioned sculpture projects and public installations for the past several years, including ones at Bridgette Mayer Gallery in 2013 and 2015 and with the gallery at Art Miami and Art Silicon Valley. This is the first commissioned public art project I have completed and the results to me are stunning. I believe the result is in artistic integrity with the mission of the project committee as well as Temple University. It was my hope to activate the corner into a dynamic visual experience. I hope the students are inspired and can use the space to congregate and take the time to pause and reflect. During the six-day installation process, I had many students come up to me seeming very intrigued and excited about the project. One that sticks out in my mind was a young woman who wanted to know what the piece was about and when I told her, she responded, “I now feel safe in this neighborhood.” It was a great feeling for me to not only make an impact on the building aesthetically, but also to help empower the students. I am extremely proud of the results and hope that the public will come and see the site.”

Bridgette Mayer states, “It was a pleasure to once again work with Temple University on a major art installation. I think the RDA, Temple University faculty and students utilizing the garage at Montgomery and 11th Streets and those living in the surrounding neighborhood will be both pleased and inspired. This was a very ambitious project that was started several years ago and it is wonderful to see it completed and exceeding everyone’s expectations. The other satisfaction for me was the RDA and Temple committee selecting a wonderful Philadelphia artist I have had the privilege of working with for over a fifteen year period, Rebecca Rutstein. I hope people will take a moment out of their busy schedules to come and be inspired by what is possible with public art.”