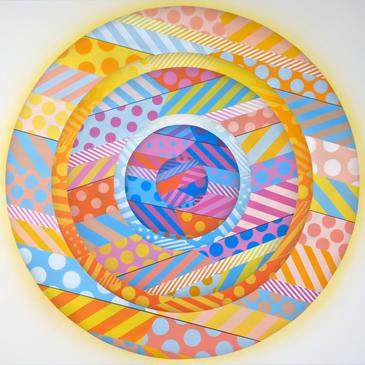 Bridgette Mayer Gallery Re-Opens to the Public in its Historic Washington Square Location at 709 Walnut Street with a Bold and Exciting Group Exhibition, Starting June 1, 2021.

Since its establishment in 2001, the Bridgette Mayer Gallery has represented and exhibited artists whose work displays the variety and genius of contemporary art now being created in the US. The gallery represents artists working in painting, sculpture and photography with an emphasis on innovative process and content-driven ideas that speak to beauty, technology, culture and the contemporary landscape. The gallery is excited to once again welcome the public into its historic 1799 Philadelphia brownstone to view groundbreaking contemporary art.

Bridgette Mayer Gallery will kick off its re-opening with an inaugural group exhibition titled Karmic Joy beginning June 1, featuring many of the artists from the gallery’s stable of seventeen local, national, and international artists, as well as some new faces. The show celebrates the joy of welcoming the Philadelphia community back into the gallery, as well as the joy that can be found in art and in life. The title of the show is a nod to the 2011 group exhibition Karmic Abstraction, which celebrated the gallery’s re-opening after an extensive renovation that took place over much of 2011. Visitors can expect the same bold, thoughtful programming that they know and love from Bridgette Mayer in the coming exhibition, and in many future exciting shows.

The past five years have brought many exciting projects for the gallery. In 2020, Bridgette Mayer Gallery wrapped up a one-million-dollar art consulting project with the newly-opened Fashion District Philadelphia, a Percent for Art project, as well as a $700,000 consulting project for Aramark’s new headquarters launch in Philadelphia. In 2020, Bridgette Mayer also published two books created to help artists find success in the art industry, titled The Modern Artist’s Way and Art MBA: Mindset. Bridgette Mayer Gallery has participated in numerous art fairs since 2016, including Aqua Art Miami and the inaugural Philadelphia Fine Art Fair, and has placed its gallery artists’ works in countless private and public collections in Philadelphia and beyond.

The gallery artists have also continued to find great success over the past several years. Neil Anderson, the first artist to be represented by Bridgette Mayer Gallery in 2001, celebrated the placement of a major painting at the Pennsylvania Academy of the Fine Arts and at the Susquehanna Museum of Art, as well as a solo exhibition at the Milton Art Bank in Milton, PA that is currently on view. German artist Jessica Backhaus has published multiple solo and collaborative books of her photographs, including a new book that will debut in May. Backhaus also saw a solo exhibition travel through Europe starting in 2018. In 2017, Arden Bendler Browning installed a commissioned painting at the Philadelphia International Airport as part of its permanent collection, and she is looking forward to her inclusion in the upcoming group show Fields and Formations: A Survey of Mid-Atlantic Abstraction at the Delaware Contemporary and the American University Museum at the Katzen Art Center in the Fall of 2021. Charles Burwell recently created two large public murals in Philadelphia, the first done in collaboration with Mural Arts Philadelphia and installed in 2017 in the Spring Garden District, and the second installed in 2019 at Fashion District Philadelphia and serving as a Percent for Art project. Dana Hargrove showed her installation piece Wall at Saatchi Gallery in London, and has just announced her participation in the 2021 Faculty Exhibition at Rollins College in Winter Park, Florida. Harvard professor and photographer Sharon Harper showed her work in a 2019 group exhibition at Southeast Museum of Photography titled This is Climate Change. In the same year, she celebrated the Metropolitan Museum of Art’s acquisition of her work. In the past year, Kaoru Mansour has seen her inclusion in a group exhibition titled We’re Here at the USC Pacific Asian Museum and was featured as a cover artist for Catamaran Literary Reader’s Winter 2021 issue.

Tim McFarlane has also completed some ambitious projects recently, including an installation piece in the group exhibition All Night Party at the Center for the Arts Gallery at Towson University, as well as a collaborative print project with the Brandywine Workshop and Archives. Fellow Philadelphia-based artist Eileen Neff installed one of her largest public art projects at Fashion District Philadelphia in conjunction with the Percent for Art initiative in 2019, and she is excited to announce the inclusion of five works in the Philadelphia Museum of Art’s exhibition New Grit: Art and Philly Now, opening May 7. Nathan Pankratz celebrated a solo show at NoBA Artspace in 2018, has created numerous largescale paintings for private collections, and recently had a large painting acquired by Temple University. In 2018, Rebecca Rutstein served as University of Georgia’s Delta Visiting Chair for Global Understanding and participated in a deep-sea expedition with scientists at UGA. The 64-foot interactive sculpture resulting from the expedition’s findings was recently acquired by Georgia Museum of Art. In 2019, Rutstein also installed a large mural on the AT&T Building along the Schuylkill River in a collaborative project with Mural Arts Philadelphia. Damian Stamer mounted a solo exhibition titled Returning at Koki Art in Tokyo in 2019, and in 2020, his painting Horry County 6 was acquired by Crystal Bridges Museum of American Art in Bentonville, Arkansas. Scottish artist Graeme Todd mounted three different solo exhibitions in 2018, showing at galleries in Edinburgh, London, and Rome. Finally, paintings and sculptures by Dina Wind (1938-2014) have been acquired by a number of public collections, including Grounds for Sculpture in Hamilton Township, New Jersey and recently the Woodmere Art Museum in Philadelphia, and her legacy was honored with the Outstanding Philadelphia Artist Award at the Philadelphia Fine Arts Fair in 2019.

In addition to the artists listed above, the Gallery is excited to also announce representation and new works by three new artists.

Maryland-based artist Allen Bentley captures the dynamism of life in motion in his paintings. In 2020, Bentley kicked his love of motion into the next gear with his Momentum series, in which he paints fast-paced cars and explores the energy and exhilaration of speed. Recently, Bentley presented a solo exhibition at Kentlands Mansion, a public art center in Gaithersburg, MD, and was featured in group shows at Jo Fleming Contemporary Art in Annapolis, MD and the Novado Gallery in Jersey City, NJ.

Also joining Bridgette Mayer Gallery is Julie Goldstein, whose art practice draws inspiration based on personal experiences that reside in storytelling, humor and whimsical interpretations around motherhood, marriage and everyday life. The stories told are often semi-autobiographical and are inspired by her personal relationships along with lively depictions of women throughout history and in a variety of societies that have collaborated to break societal norms, create change, empower and inspire. In multimedia works on paper and fabric, she mixes lithographic and woodcut printmaking along with text, stitching and embroidery techniques. Goldstein is also passionate about art education and is a Professor of Printmaking in the Art, Media, and Design Department at California State University.

Finally, the gallery welcomes Jason Woodside, an acrylics and spray paint artist whose bright bands of patterns and shapes look just as striking on a gallery wall as they do in a public mural. Woodside has collaborated with a number of major brands and organizations on campaigns and public art projects, including Google, Adidas, and the Getty Museum. He is currently based in New Zealand.

Exhibition information: Karmic Joy will be on view from June 1 – July 31, 2021 at
Bridgette Mayer Gallery.

COVID policies: The health and safety of our community is our highest priority, and we are expanding our cleaning and safety protocols to abide by city guidelines. All guests above the age of 2 and all gallery staff will be required to wear CDC-approved face coverings at all times, and are asked to maintain at least a 6-foot distance between their party and other at all times. Gallery staff will continue to monitor Philadelphia’s guidelines and adjust our policies accordingly.