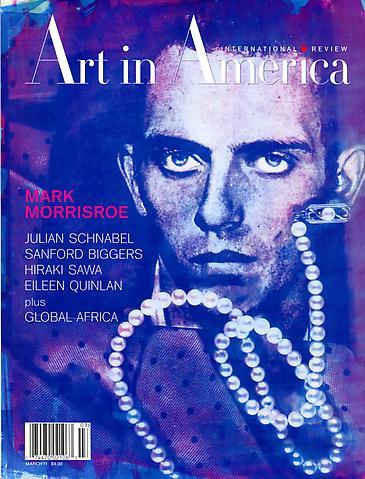 In this show of nine recent paintings, "Structuring Desire/Desiring Structure," Charles Burwell offered no quiet moments. The title suggests a mind comfortable with systems of order, such as those found in math and science. But Burwell's visual world, which comprises overlapping shapes and striated hues, is brilliant and delightful. While we think of scientific investigations as somber and labored, Burwell's abstract structures, replete with optical effects, dazzle the eye, prompting viewers to check and recheck what they see. An untitled work from 2010, for example, features the interplay of blue stripes against a burnt-orange ground, with flashes of white where the colors intersect. Rather than hitting you over the head, the artist presents a fleeting gestalt, a sleight of hand.

A magician with secondary and tertiary colors, Burwell creates highly patterned surfaces involving layers and layers of paint. The second or third layer serves as background for crisply defined forms - lines, clover shapes, circles and semicircles that often converge. Yet elements such as a totemic rectangular monolith, rendered in burnt orange on a viridian field in Distant Key (2010), exemplify his deviation from standard design vocabulary.

Burwell, who earned an MFA at Yale in 1979, is one of a cluster of artists, including Jim Lambie and Odili Donald Odita, who combine lessons learned from Color Field, Op art and pattern painting of the 1970s. And, yes, the immediacy of Pop art is evoked as well. These artists all share a strong measure of chromophilia.

Despite his use of geometric forms and design principles, Burwell never loses the visceral intensity of gesture. Looping colored stripes and concentric circles convey movement that is simultaneously fluid and controlled. Snippets of various shapes collide as in a vortex. The key work in the exhibition, Interior, Interior (2010), evokes the possibility of ontological states - the varied landscapes within us - corresponding to the spatial relationships in the painting. "Structuring Desire/Desiring Structure" had an intensity of spirit that could be felt; its overriding message was the sheer joy of painting.