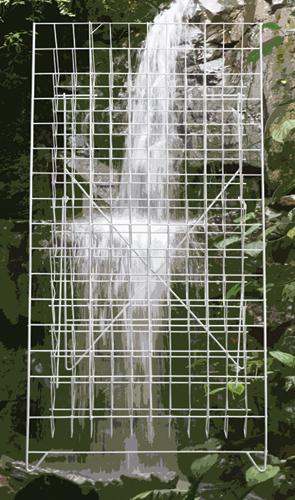 Two-time Temple graduate Eileen Neff remembers traveling south every Saturday as a student in junior high school, when her father drove her from their Bustleton home to the Fleisher Art Memorial in South Philadelphia.

Recently, Neff has traveled even farther south to advance her artistic knowledge and experience. She participated in a three-week artist residency in the rainforest of Costa Rica.

“For me, it was another idea of nature, a denser and more saturated landscape than I had ever known,” Neff said. “Everything was in the details, and the details were everywhere. There was something remarkable to see at every turn.”

Neff’s photographs of the tropical setting will be on display at her solo exhibition, “Traveling into View,” in the Bridgette Mayer Gallery at 7th and Walnut streets until April 18.

Neff’s subject matter often includes the exploration of striking landscapes and surroundings. “Traveling into View” transports the observer to corners of Costa Rica with its portrayal of the rainforest’s sprawling leaves, expansive horizons and lurking wildlife. The collections experiment with Neff’s methods of presentation; while some of her photographs seem straightforward and unaltered; others contain abstractions.

“The work explores some questions of travel itself — what it’s like to be somewhere unfamiliar, what one can hope to know of another place in such a short time, and how to come away with something that speaks of the experience,” Neff said.
Neff didn’t enter Temple as an art student, let alone a photography major. The Northeast High School alumna chose to stay in Philadelphia for its affordability and selected Temple for its English department. Fascinated by poetry, Neff enrolled in the College of Liberal Arts, although the idea of pursuing fine art had always been on her mind.

“At that time, choosing to be an English major was in some ways a default choice, a reasonable option, a way to be educated when you weren’t certain about what to pursue at the moment,” Neff said. “I’m not sure what that major would be now. I wasn’t ready to declare myself an artist.”

Although she received her bachelor’s degree in English, Neff spent any free time she had in the art department at Temple. She took classes in the now-nonexistent South Hall with Neil Kosh, a painter and professor from North Wales who taught at Tyler for more than half a century.

After graduating from Temple in 1967, Neff wasn’t ready for her educational career to be over. A few years later, she entered the Philadelphia College of Art, now known as the University of the Arts, where she received a Bachelor of Fine Arts in painting. Neff’s interests in English literature and art were intertwined, she said.

“I was trying to make some kind of visual poetry with my paintings, images that referenced the world, but that also engaged different levels of abstraction,” she said.

Her continuing education inspired her to pursue the artistic side of that relationship in greater detail.

“The deeper connection with art making that came from my experience at the Philadelphia College of Art encouraged me to stay close to a learning situation where I could continue focusing on my questions and further develop a visual language of my own,” Neff said.

Finally, she headed back to Temple, this time to receive her MFA in painting.

While teaching art at the Miquon Upper School in the Germantown section, Neff was offered a free class at PCA in return for working with a student-teacher. Wary after taking a printmaking class that she had found too tedious, Neff chose a photography course. She began snapping pictures of her paintings and outside surroundings, and before long, she had fashioned a personal darkroom in her own home.

It took one impromptu night class for Neff to change her artistic medium completely to photography.

“Photography let me think like the former English major in me, as I could collect images, almost like words, and arrange them so that they said something beyond what they suggested on their own,” Neff said.

Since discovering photography, she has not created a single painting.

Neff has found other ways to incorporate her passion for writing and literature into her artistic career. Between 1989 and 2002, she wrote reviews of various works for Artforum, an international magazine.

“In retrospect, I realize that it was my degree in English that gave me the confidence to develop a practice of writing about art,” Neff said.

She’s also accompanied her works with famed poets like modernist writer Wallace Stevens, and has cited the transcendentalists Thoreau and Dickinson in her photographs.

Neff plans to continue exploring photography through travel as she considers visiting the Banff Centre in Alberta, Canada, where a continuation of the Rocky Mountains reside, as well as the Bernheim Arboretum and Research Forest in Kentucky, where more than 1,900 plant species are located.

Today, Neff’s role as a former English major shines through her exhibit.

“It’s still a search for that poetry I thought I understood so long ago,” Neff said.

Angela Gervasi can be reached at angela.gervasi@temple.edu.