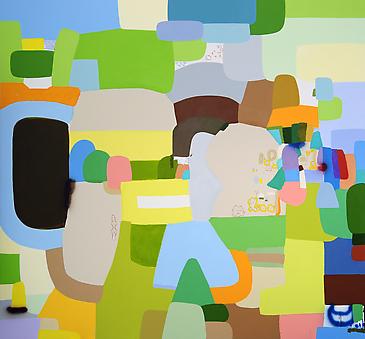 As the first gallery in the United States to present the work of prominent Costa Rican painter Federico Herrero in a solo exhibition, the Bridgette Mayer Gallery recognized the artist’s talent as well as the potential for his future creative career early on. Recently, Herrero was honored by having three of his works acquired by the prestigious Guggenheim Museum permanent collection: Tristes trópicos, Landscape with Pyramids (Paisaje con pirámides), and Pan de azucar. He will also be featured in the museum’s upcoming exhibition “Under the Same Sun: Art from Latin America Today” coordinated by Pablo León de la Barra, Guggenheim UBS MAP Curator. As part of the museum’s global art initiative, this exhibition features 37 artists or collaborative duos from 16 Latin American countries. The show will be on display from June 13 – October 1, 2014. Following its stint at the Guggenheim, “Under the Same Sun” will then travel to two additional international venues.

The gallery is pleased to announce that the Saatchi Museum in London also recently acquired several Herrero pieces for its collection. These works will be on display in a forthcoming exhibition entitled “Pangaea II: New Art From Africa and Latin America.” The Costa Rican artist is one of fifteen artists in the show, which will be on view from March 4, 2015 to September 6, 2015. In addition, Herrero has previously been featured in such prestigious exhibitions as Art Basel, the Venice Biennale, the Seville Biennale, and the Aichi World Expo in Japan, to name a few.

A selection of Herrero’s paintings will be included in the upcoming exhibition “Young & Fun: Abstraction” held at Bridgette Mayer Gallery from June 24 – August 15, 2014. He is one of seven contemporary painters in the show. The exhibition will be accompanied by the work of Alejandro Diaz, who will be exhibiting one of his neon text pieces in the Vault gallery space. For additional information on available works and pricing, please contact Gallery Director Bridgette Mayer: bmayer@bridgettemayergallery.com.