Interview between Jan Rattia and Michael Callahan in GPhilly 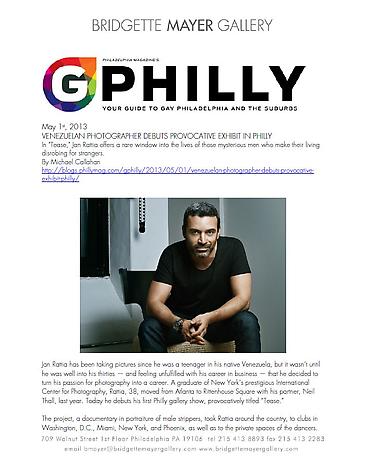 Jan Rattia has been taking pictures since he was a teenager in his native Venezuela, but it wasn’t until he was well into his thirties — and feeling unfulfilled with his career in business — that he decided to turn his passion for photography into a career. A graduate of New York’s prestigious International Center for Photography, Rattia, 38, moved from Atlanta to Rittenhouse Square with his partner, Neil Thall, last year. Today he debuts his first Philly gallery show, provocatively titled “Tease.”

The project, a documentary in portraiture of male strippers, took Rattia around the country, to clubs in Washington, D.C., Miami, New York, and Phoenix, as well as to the private spaces of the dancers. The Latino photographer’s beautiful, often haunting images break through the fantasy and offer a rare window into the lives of an oft-misunderstood group: the mysterious men who make their living disrobing for strangers.

G Philly: What inspired you to do this project?
Jan Rattia: Curiosity. What started out as working with one guy as part of one image, along with a model car for previous unrelated work, evolved into this whole new project. I became interested in the guys beyond their obvious physical appeal. There’s very little on the subject out there. It’s a very gender-biased topic, so I felt compelled to create and share imagery of male adult dancers.

GP: How did being an out gay man doing this project affect the way you approached it?
JR: I had to keep a balance, to avoid creating images that could have been perceived as more homoerotic and exploitative than content-rich. I didn’t want to dilute the project by making it overly sexy. That wasn’t the objective. Since most on my subjects were straight, I had to ensure that my own sexuality was not perceived as the driver for the work. That was the only way to allow the intimacy of the shots to happen.

GP: What were the challenges?
JR: Location challenges meant I had very little control over lighting conditions while shooting. But that turned into a thrill of making something work visually with whatever lighting there was available. Also, since most of these guys are now my friends I’m sure they wouldn’t mind me telling you that showing up on time is not exactly their forte. They work long hours at night and catch up with life during the day. So setting up shoots and having ample time to execute them wasn’t always easy.

GP: What surprised you most as you documented the lives of these men?
JR: How not all that different they are from you or me. The humanity that connects us all and the challenges we face are so the same—as are their goals and aspirations.

GP: How is our perception of strippers different from what is going on behind the scenes?
JR: I was certainly guilty of buying into whatever that public perception might be. But in most cases these are hard-working, smart guys, who are far more complex personalities than you might expect. But they’re also great actors. They sell fantasy. Sure, there are your stereotypical vapid dancers. But I have to tell you, those with whom I interacted were far from it.

GP: Do you have any ideas for your next project? What is catching your eye for down the road?
JR: Lately, I’ve been exploring the ways in which my recent move to Philadelphia is influencing my work. But I’m not done with “Tease” quite yet. Stay tuned.

“Tease” will be on exhibit in the Vault Room at the Bridgette Mayer Gallery today through June 1, with an opening reception with the photographer on Friday, May 3, from 6 to 8.30 p.m. For more information: bridgettemayergallery.com or janrattia.com. You can also follow Rattia on Instgram @jrviews.