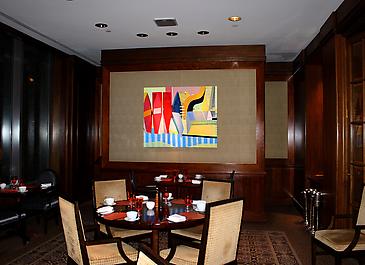 Equally drawn to color, science, math, and emotion, Mark Brosseau discovered art by way of chemistry and architecture. Mark entered Dartmouth College intending to study chemistry, then architecture. Brosseau soon took a drawing class that changed not only his college major but also his life by introducing him to the world of creative exploration that fuels his passion and intellectual curiosity today. He graduated with honors from Dartmouth in 1998 with a BA in Studio Art. He then earned an MFA in Painting from the University of Pennsylvania in 2001, followed by a year of painting and printmaking in Iceland as a Fulbright Scholar.

Brosseau has had solo exhibitions at Lyndon State College (Lyndon, VT), the Icelandic Printmakers’ Association and Galleri Skuggi (Reykjavik, Iceland), St. Joseph’s University, and the Bridgette Mayer Gallery (2006 and 2010). His work has been featured in numerous publications, including New American Paintings (2003), and group exhibitions (among them: Art of the State 2008 at the State Museum of Pennsylvania in Harrisburg, Pattern Disruptive at Hopkinson House Gallery in Camden, New Jersey, and Young Talent at the Washington Art Association in Washington Depot, Connecticut). Brosseau is included in notable private and public collections including the United States State Department, Dartmouth College, The Fox School of Business at Temple University, among others.