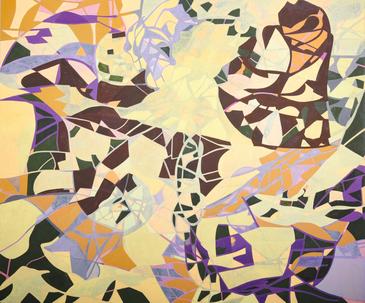 Each of these abstract paintings is a “song” that celebrates the earth. They are begun simply, without a final plan, and improvised until the relationship between parts (like our own relationship with the earth) becomes complex and interdependent.

Describing the voyage he makes in the studio each day Anderson explains, “The initial drawing from which I began is based on natural linear material. The drawing itself is only useful for suggesting structures from which I might build a formal pattern. Turning random occasions into conscious formal order moving step by step from the arbitrary to the necessary, from not knowing to the excitement of knowing to the place where every inch of the surfaces is accounted for gives me great satisfaction.”

Neil Anderson was Professor of painting at Bucknell University from 1958 to 1999. He has exhibited nationally and many of the paintings presented here have never been exhibited before. Anderson lives in Lewisburg and is represented by Bridgette Mayer Gallery.