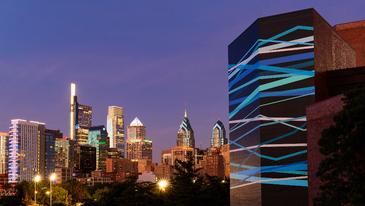 Rebecca Rutstein always loved art as a child and wanted to be an artist when she grew up, but she didn’t believe it was an option until her father encouraged her to pursue her passions when she was applying to college. It was at Cornell University, where Rutstein earned an undergraduate degree in art, that she took a “rock for jocks” class to fulfill distribution requirements and fell in love with geology.

Rutstein was inspired by geology but didn’t immediately recognize it as a subject matter. “It just kind of crept into my subconscious,” she said.

After pursuing a second degree in fine arts at the University of Pennsylvania, the Lower Merion native decided to start using plate tectonics in her paintings.

What started as a “loose metaphor” ultimately “became a genuine pursuit in wanting to learn about the geology of different places and create visual narratives about them,” Rutstein said.

A stone's throw away from home

In pursuit of this work, Rutstein began going on residencies to different places–Hawaii, Iceland, and ultimately a trip down to the ocean floor on the Alvin submarine based out of Woods Hole, Massachusetts–doing site-specific trips to complete projects inspired by the geology of the regions. Her trip in the Alvin submersible was definitely a highlight and has inspired much of Rutstein’s painting and sculpture since.

“It is really an unbelievable experience to descend in the water column,” Rutstein said. “You’re down there for nine hours. It was surreal. I described it at the time, and I stand by this, as the most incredible experience of my life, other than having kids.” Rutstein has two school-aged sons.

For a while, Rutstein ran a graphic design business on the side, but for the past five years, she has been a full-time artist. Rutstein has been an artist-in-residence at locations around the world. In addition, she has earned the Pew Fellowship in the Arts, an Independence Foundation Fellowship, a Pennsylvania Council on the Arts grant, is an MIT Ocean Discovery Fellow, and was recently named the Delta Visiting Chair for Global Understanding – awarded to leading global scholars and creative thinkers who do groundbreaking work at the University of Georgia.

“It was such an honor because it was just such a visible spot,” Rutstein said. “It feels like I’ve contributed something positive to the city.”

Rutstein, who has long been represented by the Bridgette Mayer Gallery in the city, said she has stopped working out of her South Kensington studio for now, because of the coronavirus outbreak. She has set up a studio on the third floor of her house, working on small scale paintings 12 x 12 inches, for the moment.

“It transports me mentally and keeps me sane able to compartmentalize a little bit when I’m focusing on my work,” Rutstein said. “It feels good to create some beauty in the middle of all of this.”