Rebecca Rutstein featured in South Philly Review, with the unveiling of her mural &quot;Convergence&quot; on the AT&amp;T building - News - Bridgette Mayer Gallery

Rebecca Rutstein featured in South Philly Review, with the unveiling of her mural "Convergence" on the AT&T building 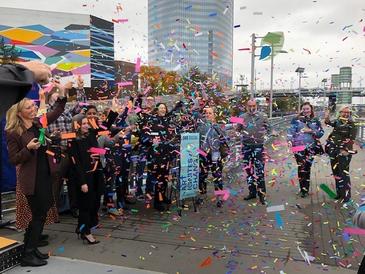 Whether strolling on the boardwalk, cruising down I-76 or racing in a kayak, passersby along the Schuylkill River at South Street will now be welcomed with a kaleidoscopic piece of public art.

Unfurled across three walls on the AT&T building, “Convergence,” a new mural unveiled last week, has been woven into the Schuylkill cityscape just beside the South Street Bridge.

The nearly 3-year-old project of Mural Arts Philadelphia was the vision of Philadelphia-based artist Rebecca Rutstein, whose array of mediums works to highlight facets of science and technology.

Though Rutstein, an MIT Ocean Discovery Fellow who has received the Pew Fellowship in the Arts, an Independence Foundation Fellowship and Pennsylvania Council on the Arts grant, has had work displayed across the world, “Convergence” serves as her first mural.

“I think the success of public art relies heavily upon the space in which it’s located,” Rutstein said. “It needs to be accessible. These walls are certainly far reaching…That opportunity also posed a challenge – to create a work of art bold enough to be enjoyed from a distance but with enough visual nuances to be appreciated closer up, like here on the trail.”

Composed of colorful crisscrossing, “Convergence” mirrors the intertwining networks of transportation pulsating around the mural, including railroads, bridges, roads, ramps and trails and, of course, the river.

For the artist, a crucial part of her research process was simply observing the sights, sounds and shades of the Schuylkill Banks.

“I wanted the mural to be striking but also harmonious within its environment, including the street art that runs along the railroad walk below,” Rutstein said. “And, I actively responded to this when designing the mural.”

Tying into the river’s cultural relevance, portions of the mural were inspired by the annual African Odunde Festival, which invites attendees to bring fruit and flower offerings to the Schuylkill.

After Rutstein completed the designs, the mural was then painted by a team of local Mural Arts muralists, including Nathaniel Lee, Sammy Kovnat, Lucia Michel, Kien Nguyen and Doug Woods.

“Sometimes, what I think art does is that it has us look at something that we thought we knew but we look at it in a totally new way,” said Jane Golden, executive director of Mural Arts. “And I want you to notice the patterns and the intersections of light and shadow, to meditate on the movement that you see and for such a long scale artwork, ‘Convergence’ creates an intimate moment of connection.”

Illustrating connections of all kinds, the mural is fittingly displayed on the AT&T building, which provides telecommunication services to the Philadelphia region.

The team at Mural Arts says the project would not have been possible without the company’s support in bringing Rutstein’s brainchild to life.

“For AT&T, Convergence portrays the connectivity that symbolizes our past and represents our future,” said Marissa Shorenstein, president of AT&T Northern Region. “Looking at those lines, the vibrant blues against the black, reminds us of our promise to our customers and to the people of Philadelphia, providing you the connections you need to move effortlessly through your lives, transporting voices, data and information across our communities and connecting us to one another.”

Along with AT&T, the project was funded by the PTS Foundation, Hummingbird Foundation and City of Philadelphia.

Since Rutstein’s studio is based in Fishtown, Councilwoman Maria Quiñones-Sanchez of the 7th district also attended the unveiling to express support.

The artist intends for “Convergence” to brighten the lives of Philadelphians while they embark on their everyday routes around the river, as this stretch of the Schuylkill continues to bring together diverse transport, pathways, culture and people.

“For me, public art can humanize the built environment,” Rutstein said. “It was my hope to create something bold, uplifting and dynamic that could improve the daily experience of people passing by it.”