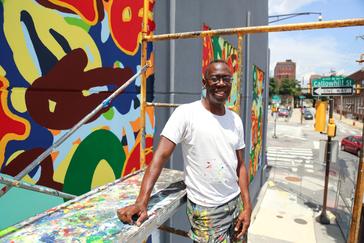 Over email, I asked Tim to tell us more about his new public artwork: “The piece alludes to the natural origins of the intersection of 10th Street, Callowhill Street, and Ridge Avenue, as that area was once considered a suburb before railroads, factories, and large-scale immigration began to change the landscape. On another level, I was drawn to the present-day diversity of people who call the Callowhill neighborhood home, the Chinese community and those who use this area as a conduit to other parts of the city. I was interested in giving some sense of movement and changing perspectives of the area through color and form, while using changing overhead views of the intersection to anchor the other forms in the murals three panels.”

In our city of murals, most of which tends to be figurative or representational, I asked Tim about the importance of creating abstract art in our public space:

“Abstract art in the public space is very important to me because it’s something that can make people rethink relationships to their immediate environments in a different way than representational art. Humans are wired to see themselves or some reflection of their ‘reality’ projected onto the world around them. But if well executed, non-representational work can reflect that reality back in ways that can make people reconsider the spaces around them especially in how they use and move through public spaces. Abstraction in the public realm can force people to actually stop and ponder what they are looking at before moving on. Representational art in the public space is much more expected and can do a good job of reminding us of historical events, politics, and other present concerns that many people care about. However, public abstraction can also tap into issues, desires, and histories in unexpected and interesting ways that go beyond the recognizable.”