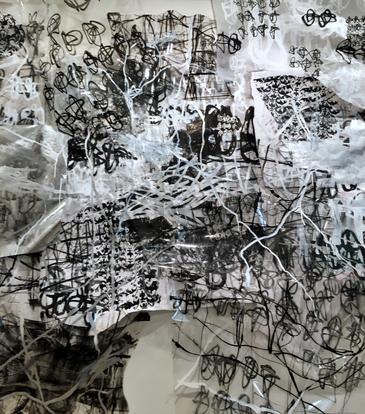 You Don't Know The Whole Thing is a new temporary, site--‐specific painting/drawing--‐based installation by Philadelphia--‐based painter, Tim McFarlane at Poggenpohl--‐Philadelphia, a German luxury kitchen design showroom located in Old City. You Don't Know… is centered on themes of memory and transmission of information and asks the viewer to interpret context and specific meanings for themselves. It is a piece that was partially inspired by McFarlane’s recent project at the Cherry Street Pier in April 2019, where he was able to make a large, 10 x12 foot work on panel on--‐site that was meant to be experienced for a limited amount of time. You Don’t Know The Whole Thing represents an offshoot of Tim’s studio practice that explores his interest in the temporary, chance and change in his paintings. He approached this project at Poggenpohl with the mind--‐set that this is a temporary piece whose parts will be used for other works once the show is concluded.

You Don’t Know… is a mixed media, multi--‐part work that engages directly with the architecture of the showroom. It is situated in a niche that measures 13’ x 91” x 13”. For this piece, McFarlane used a variety of media including, paper, reflective Mylar, clear acetate, acrylic paint and acrylic paint markers, nails and tape. The work’s dimensions are variable. Components of it were made in his studio, but the bulk of it was painted, drawn and arranged
on--‐site.

Tim McFarlane’s paintings and works on paper examine the fluid and contradictory nature of memory and place, with an emphasis on color, multi--‐layered systems and process. A 1994 Temple University/Tyler School of Art graduate, McFarlane’s works are represented by the Bridgette Mayer Gallery (Philadelphia).

Tim McFarlane has exhibited his work extensively in the U.S. and featured in art fairs in New York, Miami, Dallas, San Francisco and Philadelphia. He has been a visiting artist/critic at several universities, participated in various artist panels at UArts--‐Philadelphia, The Pennsylvania Academy of the Fine Arts and Tyler School of Art. Tim McFarlane’s paintings and works on paper reside in numerous private and public collections, including those of West Virginia University, Bucknell University, Temple University and the Hyatt Hotel in Philadelphia.

You Don't Know The Whole Thing is on view at Poggenpohl--‐Philadelphia from June 28--‐ August 31.