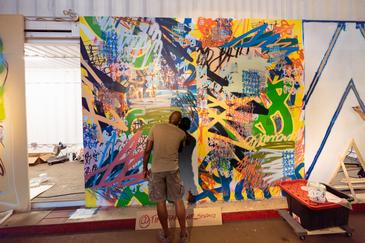 Philly, it’s time to get your butt down to Cherry Street Pier, because Tiny Room For Elephants 2022 is in full swing!

Since its inception in 2014, TRFE has grown from a small, underground art and music event into a large and spectacular festival—as well as an artist collective, agency, and creative consultancy. This year, 43 visual artists and dozens of DJs and music producers are participating, and each is bringing the huge energy and passion that we’ve come to expect from TRFE.

This week, I had the pleasure of visiting the space and chatting with some of the artists, who are currently working on painting/installing/creating their pieces. This is something you can and should go see for yourself—part of the excitement of this festival is getting the chance to see some of Philly’s most talented artists painting live! You can walk right up and talk to them, even—just remember that they’re there to create, so be respectful of their time.

I also met with two of the founding curators/organizers of the event, YaYa Horne and Damion “Dame” Ward, who told me about their vision and some of the moments that make TRFE what it is. One thing they care deeply about is selecting up and coming artists and giving them their first big wall. Participation in TRFE is invite-only, so they spend a lot of time on selecting artists that they feel are right for the event.

YaYa and Dame also want to keep artists on their toes. That’s why they’re always moving to new spaces and holding the event at different times of the year, but above all, it’s why they give artists nearly unlimited creative freedom. They find that it helps them innovate, or “level up.” Some of the artists they pointed to this year as evidence of this are Eric Okdeh, who cut a hole in his wall to install a stained glass section; Seper, who is building an infinity mirror; and DM Weeks, who is reskinning a racist pinball machine and offering art prizes to top scorers.

I found other examples of this leveling up in talking to the artists. For example, Oluwafemi (AKA “Femi”) told me that participating in TRFE opened his eyes to what his art career could look like; namely, that it could be something other than a hustle.
And SENS told me that he decided to mount crushed spray paint cans on his wall to make it feel more like the train cars that he usually uses as a canvas.

Priscilla Bell told me “You can just do whatever comes to mind, and you have a supportive group of people that are around you.” To that end, she’s painting an allegory of indigenous Puerto Ricans. When she’s finished, the boricua woman in the center will be flanked by the national tree of Puerto Rico, the ceiba, and the two ancestral grandmothers of modern-day Taíno and Yoruba Puerto Ricans. Their role, she said, is supporting Puerto Rico in its fight against gentrification and displacement by billionaires who are buying up beachfront property and trying to illegally privatize it. In a nod to recent protests against this, the central figure will be crushing a “private property” sign under her feet.

I wish I could have gotten every artist’s story, but not all the artists were there. One of the things that makes this event doable for everyone involved is the ability to come in at any hour of the day or night. This is thanks to the generosity of Dame, who has been literally sleeping at the pier every night in order to make the space available at all times. Many artists are fully availing themselves of this—Seper told me that leaving at 1am would be an early night for him. And one artist who just had a baby has been coming in from 2am to 5am because it’s the only time he has available.

For this reason and many others, I think that the quote by artist Tim McFarlane on the Tiny Room For Elephants website is a great summation: TRFE “isn’t easily boiled down to a digestible sound bite; it encompasses so much and is experienced in different ways by everyone involved. ‘Experience’ is the key word here because TRFE is an event that has to be experienced in order to have some idea about what it is for you.”

Creation is happening from now through July 20th. Check out the process any time Cherry Street Pier is open, and support the artists, musicians, and organizers by attending the grand unveiling and celebration starting on the 21st and going through the 24th. Find out more on the TRFE Instagram.