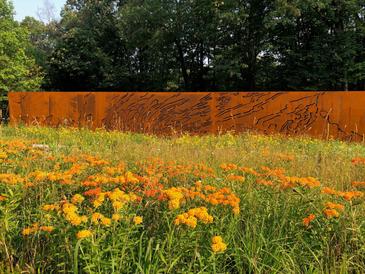 The creators of The Bower, a new Pennsylvania sculpture park and native garden, call it a “community-oriented rural setting featuring woodlands, naturalized landscape, gardens and large-scale sculpture and land art,” where they’re “committed to supporting and becoming a resource for the arts, education, and nonprofit communities.” Wait a second…Is this a scene from Milton?
Not exactly. The Bower, nestled in the folds of the Appalachians about a half-hour’s drive northwest of Harrisburg, in the small town of Shermans Dale, is more down-to-earth than Paradise Lost. It features more than beauteous flowers and odorous, bushy shrubs, with diverse sculptures by 10 artists selected from an international pool.
“We wanted art to leverage nature and nature to leverage art,” says Bower cofounder Bill Allis, who opened the 36-acre site earlier this year with his wife, Jane Allis, both longtime residents of the Perry County property.

Philly calls
While the setting might be a far cry from the bustling streets of downtown Philadelphia, and is about two hours from 30th Street Station, the new public arts initiative shares more with Philadelphia than a state and a nearby Amtrak line. Its call to artists was issued through Philadelphia’s Bridgette Mayer Gallery, and with 130 entries from around the world, nearly half of the selected emerging or mid-career artists can claim history or home in the greater Philadelphia area.
One artist likely to be familiar for BSR readers is Rebecca Rutstein, known in Philly’s public art world for pieces including Convergence, her recent mural on two sides of the AT&T building. Many of Rutstein’s pieces are light, airy, flexible, laser-cut metal works, but her Bower piece, Ridge & Valley, is a majestic departure. It’s composed of three monolithic panels of Corten steel, cut with topographical reference to Pennsylvania’s Ridge and Valley region. Rutstein’s work, which often reinterprets and refigures scientific themes, shines conceptually through the use of the heavy industrial material in a rural setting, and the metal’s weathered expanse evokes the rust of the train cars traveling from coal-bearing beds of the Appalachian Mountains.

Pollen, steel, and bronze
Pollen, another steel installation, is the work of Robert Koch, who grew up outside of Philadelphia and briefly attended University of the Arts.
“Living in the rural area, it’s always been a part of my work … It’s not just in this project, it’s pretty much in everything that I do,” Koch says. Pollen has five welded metal spheres, unmounted and ambulant, which can be moved around the property. While understated, the spheres playfully suggest that each viewer acts as a pollinator and is complicit in growth and propagation.
Pollen sits just west of Mariposa, an abstract cast bronze by Mark Pettegrow. The sculpture continues the iterative work of Pettegrow’s series for the Michener Art Museum, and its polished edges gleam with a sense of movement in the open meadow.
“I’ve always felt that the sculpture works well outside,” Pettegrow says, “and it works well in an environment where it has things growing under it, so it has the sense that it’s floating or alighting into an environment.”
On a slight rise to the east of all three of these pieces is perhaps the most vibrant among the meadow installations: Phases, by Melanie Serkes. It’s Serkes’s debut as a large-scale sculptor, and the work is a brilliantly orange meditation of powder-coated steel.
Serkes arrived in Philadelphia in 2006, lured by the city’s location and burgeoning arts scene, and she has been working at bronze foundries for the past 15 years.
“I think I was really struck by the monotony of life, by having to do the same thing over and over again every day,” Serkes says of how the city has shaped her art. “Suddenly I was faced with riding the train and going to a job and doing the same thing over and over and over again, and I do think that has influenced maybe the repetition in my work, to some degree.” Scaled up repeatedly from an original toothpick-sized model, Phases perches on a rise overlooking staggered river birches and red-twig dogwoods. The orange sculpture spins away from a male-dominated history of red steel works by design.

A wilder cousin
The sculptures may be markers of formality, but The Bower is a wilder cousin to sites like the Philadelphia Museum of Art’s sculpture garden and New Jersey’s Grounds for Sculpture. Still in its first year, The Bower features young native plants and shrubs that give the grounds an edgy, enthusiastic energy, and their growth will be an ever-evolving part of the experience. As fall approaches, the ephemeral negative space between plants will grant Bower visitors a glimpse of structural elements that, at this time next year, will be embraced by growth. One example is the base of Thea Alvin’s magnificent and stirring The Kiss, two walls of reclaimed barnstone that leap toward one another at their meeting point and rise effortlessly into a free-standing arch.
That the landscape should have such immediate importance—and be so integrated with the sculptures—is intentional. “We’d been to so many different gardens and sculpture parks,” explained Jane Allis, “and one thing we felt at almost all the sculpture parks we went to was that the landscape was not thought of as being as important as the art or featured equally with the art, and was instead somewhat of a background canvas to put the art on. And we really wanted them to have equal weight.”

Connected forever
To that end, the cofounders engaged Ethan Dropkin of Glenside’s Larry Weaner Landscape Associates as the horticultural advisor for the project. Dropkin was enthusiastic about the Allises’ vision, taking the rural setting, the quality of the soil, and his guess that the land behind their house has never been plowed into account: “They have a lot of interesting stuff already that can be preserved and encouraged to grow with more vigor, which we folded into the design.”
He adds that visitors who become more aware of the landscape will notice topographic transitions signaling changes in use or tone around the property. For example, formal gardens surround the cofounders’ private residence, while open drifts of wildflowers lead visitors along the public paths.

The Allises and The Bower are opening art to the public in a way that is different from metropolitan Philadelphia’s public arts scene, which stands at the intersections of so many street corners. But a sense of place—of being somewhere that belongs most completely where it is—is radically pervasive in not only the landscape but the art of The Bower.
Jane says that the artists who visited the property before finalizing their designs took direct inspiration from the landscape. “There’s a real strong connection here that I think is not always true in other sculpture parks—between where we are in central Pennsylvania, what the landscape is on this particular property, and the art itself.”
Bill agrees. “These artists are now forever a part of the landscape, and that connectedness is exciting.”

WHAT, WHEN, WHERE
The Bower sculpture park and gardens. 1190 Bower Rd., Shermans Dale, PA. The grounds are free and open to the public, but reservations are required. Reservations and requests can be made at The Bower's website.

Book a ticket to The Bower.